Perhaps give a stick for Valentine's Day. 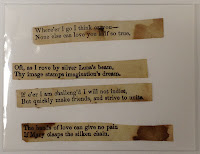 This month's artifact of the month is a dogwood stick. This stick was given to Annie Bennett in October 1878 by her then boyfriend Will Clark. Will is identified on the envelope as "Uncle Sam Clark's boy".

Also in the envelope containing the stick were four reflections:

Where'er I go I think on you -
None else can love you half so true.

Oft, as I rove by silver Luna's beam
Thy image stamps imagination's dream.
If e'er I am challeng'd I will not indict,
But quickly make friends, and strive to unite.
The bands of love can give no pain
If Mary clasps the silken chain.
Eleanor Fraser Collection 2012-027-0103
In 1882, on her eighteenth birthday, Nancy Ann (Annie) Bennett, married Joseph A. Peery, son of close family friend, and pioneer lumberman, Joseph W. Peery. Her husband died just ten years later, leaving her to raise four children alone. She never re-married, but lived in Boulder Creek until her death in 1953.

Why a dogwood stick? We may never know. I tried to speculate - was it the religious significance? But when I learned another name for the tree was the Louse-berry Tree, because  the leaves and berries could be used to eradicate lice in children, and other "vermin" in dogs (not very romantic) - I gave up - (at least for now).